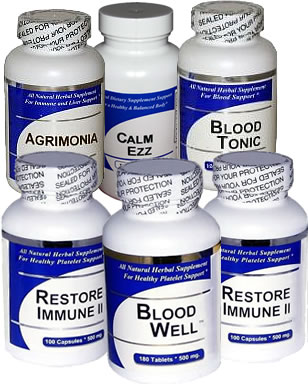 The liquid component of your blood is called Plasma and has a pH around 7.4. Human blood also consists of a number of cellular and cell fragment components in addition to plasma.

The blood's volume is 60% Plasma followed by 40% cells and fragments. Four of the most important components of our blood are red cells, white cells, platelets, and plasma. Blood Health is vitally important to your overall health.*

Eastern Medicine practitioners believe that healthy blood may avoid conditions like low or high platelets, low or high red and white blood cell counts, even idiopathic thrombocytopenic purpura, an autoimmune condition with no known cause in Western Medicine.*

Eastern Medicine philosophies are something you may want to investigate as well as the importance of supporting blood health.*

May Naturally Support Healthy Blood Including:*

Get Well Natural's Blood Well is a dietary supplement specifically designed to offer improved blood, platelet and bone marrow health. The herbal formulation in Blood Well was first utilized by a Master Herbalist & Medical Doctors over 20 years ago in Vietnam due to a lack of adequate and effective treatments available in Western medicine.
Click Here for Blood Well

Red blood cells (erythrocytes) are flattened, concave cells about 7 Ã‚Âµm in diameter. Red blood cells are the color red because they contain a protein chemical called hemoglobin which is bright red in color. Hemoglobin contains iron and is an excellent vehicle for transporting oxygen and carbon dioxide.*

Mature erythrocytes are small and lack a nucleus. There are 4 to 6 million of them per cubic millimeter of blood, and have 200 million hemoglobin molecules per cell. About 1/3 of all the cells in the body is a red blood cell (around 25 trillion in the body).*

Production of Red blood cells is manufactured in red marrow of long bones, ribs, skull, and vertebrae. Since the life-span of an erythrocyte is only 120 days, the body is constantly making new ones and destroying the old ones in the liver and spleen. The body reuses the iron from hemoglobin in the red marrow.*

White cells, (leukocytes) exist in variable numbers and are larger than red blood cells. Leukocytes normally only make up about 1% of the bloods volume. Leukocytes are found not only in the blood, but also in the spleen, liver, and lymph glands.*

There are five major types of white blood cells and they include neutrophils, lymphocytes, eosinophils, basophils, and monocytes. They are the essential components of the complex immune system. They seek out, identify, and bind to alien protein on bacteria, fungi and viruses so that they can be removed. T-cells attack cells containing viruses.*

B-cells produce antibodies. When red cells die, they are removed from the blood and their components are recycled in the spleen. Most individual white cells last 18-36 hours before they also are removed, though some types can live as long as a year.*

Platelets are irregularly-shaped blood cells that are produced in the bone marrow and contain cytoplasmic granules. Their main health function is to control bleeding and they are essential to normal blood clotting (coagulation).*

Platelets circulate for about 10 days before being removed by the liver and spleen. The average person has 150,000 to 300,000 platelets in each milliliter of blood. Platelets stick and adhere to tears in blood vessels as well as release clotting factors.*

Idiopathic thrombocytopenic purpura, also known as I.T.P., is a condition of having a low platelet count (thrombocytopenia) of no known cause.*

A hemophiliac's blood cannot clot since they have a hereditary or genetic disorder that impairs the bodys ability to control clotting. Providing correct proteins (clotting factors) has been a common method of treating hemophiliacs.*

*These statements have not been evaluated by the U.S. Food and Drug administration. These products are not intended to diagnose, treat, cure, or prevent any disease. TCM is an acronym for Traditional Chinese Medicine.

**The information provided on this site is for informational purposes only, not intended to replace your doctor's or other health care professional's advice or treatment. Nor is any information contained on or in any product label or packaging intended to provide or replace professional health care advice. Do not use the this site's information for diagnosis or treatment of any health problem, nor for prescription of any treatment or medication. Always consult with a healthcare professional before undertaking any diet, exercise, herbal or other supplementation program, taking any medications, or if you suspect you may have or already have any type of health problem. Do not stop taking any medication without first consulting your doctor.